Well, 3 posts do not a blog make (which I have shamelessy pinched from the blog of a fellow forumite!)!  I have an excuse, a very good excuse.  Well it is the only excuse I have, so it will have to do.  Before starting this blog, I had a really nasty, severe bout of sciatica.  For those of you that haven't had it, let me put it this way....I gave birth to all 3 of my children without pain relief, and I would do it again, in fact all 3 at the same time, rather than have sciatica.  I had an episode last year and a mini-cocktail of drugs and some time sorted it.  This time, I ended up in A&E, was given a shed-load of drugs, both oral and injection, none of which worked and sent on my merry-way with a bag positively rattling with a cocktail of drugs.  I tried to settle down to sewing, but it was just too much.  After months of physiotherapy, I am reasonably back to normal, and how I am now is likely to be my normal, which isn't what my normal used to be, but hey ho!

I did, during that time, make a gown for someone (more of that later), but a recent girl's night and an empty wardrobe tempted me into trying to sew again.  Well you know what they say about necessity being the mother of invention - it was time to get inventing.   I say inventing,  I raided my Burda Style magazines.  I have been collecting these magazines for years and then I fell out of love with them; their patterns were dull, dull, dull.  However they turned a corner and our romance was rekindled.  I found an asymetrical top in the July 2011 edition (pattern 113) and raided my stash, finding a silk satin-backed crepe (or crepe-backed satin) and a silk chiffon.  I decided to wing it and not make a toile, figuring that as it isn't fitted, I would probably get away with it.  Once I'd got over tracing off the pattern (I have never forgiven Burda for skimping on their pattern pages), it was an absolute dream to put together, although cutting the chiffon sleeves proved to be somewhat of a challenge.  I thought I'd pinned it to within an inch of its life.....but it moved so that in the  middle there was barely any sleeve and actually it was not even discernably a sleeve! 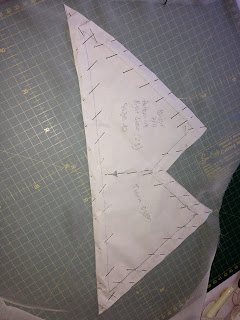 I pinned it diagonally around the seam allowance.  It was better but I still wasn't convinced. 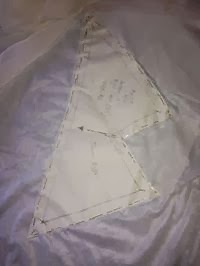 I had some lightweight iron on interfacing so I pinned to chiffon to the rough side thinking that it would be gripped by the glue.  It was a bugger to cut it that way as it was pinned to the interfacing and actually,  I couldn't tell the difference between attempt 2 or 3!!!!  I did a french seam for the side seams and just zig-zagged the trimmed edges for the neck and sleeves, which was a bit of a mistake as my beloved Janome really doesn't like zig-zag finishing, but it was ok, not great, but ok (and who else will get to see the insides when I'm wearing it?!).  In the pattern, the hemline is supposed to be elasticated but I skipped that as it probably isn't wide enough to gather and it could do with being a bit longer it I were to gather it.

The good news is I finished the top in time and wore it out.  I'm not sure about the unfinished chiffon edges.  It is already fraying, and I do like neat edges. 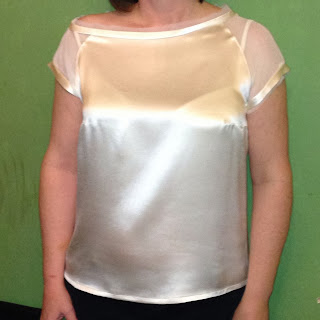 I think next time I make it (and there will be a next time) I will bind the seam allowances of the neck and sleeve edges, just for a neater finish, but I love it and it is a great wardrobe basic.  It is a great pattern to work with and could be quite versatile.  I can see it made in a jersey for a cute, casual summer top, with maybe a deeper neck band, or in a cotton with bias bound edges....the options are limitless.