Well, I don't know if you know, but I do a little acting. Yes, I'm a luvvie but I don't really tell many people.......well until now!  I belong to a small local am-dram group.  I kind of fell into it.  I thought I was going to help with costumes one day but ended up standing in on a read through and was offered the part.  The rest, as they say, is history.

The last play we did was "The Actress" by Peter Quilter.  It's about the last show night of a retiring colourful complicated actress and I got the part of her dresser.  The play was set in the 1940s (love the 1940s).  My character was unglamorous, no-nonsense and  working.  I figured I needed a uniform, a no-nonsense dress.  A visit to our local fabric shop with Miss Frillymingoe found Simplicity 8050.  I bought a bottle green polyester fabric for it.  Yes, yes, I know that polyester isn't the right fabric for the era, but, the last week of  the play is full on - everyday from Sunday (2 rehearsals) through to the Saturday, which is last night.  I needed something that could be washed and dried easily, and as non-iron as possible - ergo a "lovely" polyester.

If I were making it for me to wear everyday, I would have done a whole host of fitting changes - FBAs, waist adjustments etc etc, but being I was so short on time, I just made it to my bust size and hoped for the best.

It has an interesting side front seam and by interesting, I mean a little tricky.  The curved seam of the skirt is an opposite curve to the bodice when sewing together and, according to the instructions, requires pivoting the needle on a set point before continuing the seam.  Three attempts later, I abandoned those instructions, sewed to the point, cut off the threads, re pinned the next part and then started the seam again.  But other than that, it sewed together really well.  I was going to leave it plain but on stage it was too dark and plain, so I sewed some white bias binding over the seams and around the collar, and actually, it really lifted it.

All-in-all, it turned out not too bad.  It was a tad big in places, but not so big it looked ridiculous.  I got seamed tights and authentic styled shoes, did my hair and make-up authentically and you know what?  I crushed it, to coin a phrase.  I had quite few of the older ladies say how their mother had worn a similar dress or their hair the same way.  I have to admit that a glance in the mirror saw my grandmother looking back at me! 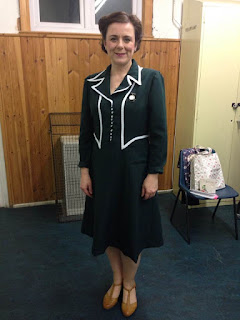