The Pretty Woman Kimono (aka The Slippery Sucker!)

Goodness me, I can't believe it is 2 years since I last posted.  I won't bore you with the details, but life got in the way BIG time, but now I am on an even keel and and am determined to sew more (actually, I have been sewing, just not blogging it, maybe I will showcase those at some point!)......and tell you more :-D

I was having a coffee with my mother-in-law on Thursday and she showed me a lovely dress she'd bought for a lunch at her golf club.  It is a sleeveless shift dress in cream with a black and red pattern.  She was bemoaning the fact that she had been unable to find any lightweight jacket and had really wanted a silky kimono style one.  A light-bulb moment occurred........I decided to make one for her.  I can and do cut my own patterns, but I was too short on time and brain cells to be be bothered with trying to work out what I needed so I went on a tinterweb hunt and found a freebie pattern from Sew Caroline  and then went on a fabric hunt (my stash was not forthcoming this time!).  I found some black slipper satin which had a lovely drape and was perfect so 2 metres of that and 2 metres of narrow black ribbon for hanging straps (is that what they are called?) came in at under £10.

I debated about which side to use the fabric, ie make it all in satin (and run the risk it looked like a dressing gown) or use the matt side.  In the end I went for the main body in the matt side with satin bands at the end of the sleeves and hemline for bit of dressiness.  I figured that this way, it could be worn more casually but still be dressed up when needed.  The pattern and instructions printed out well and were easy to to put together and follow.  It should be a quick make, but me being me decided to complicate it.  The satin (as you will know if you have sewn with it before) frays like made and so I decided to french seam it.  The bands were also sewn on the enclose the seams.    To do this, I sewed a line of stitching along one edge, 1cm in to be a foldline marker.  I then used a narrow seam and sewed the band to the jacket on the opposite side.  To finish off, I folded along the stitch line and pinned it in place just over the seam line and then "stitched in the ditch" which held it all in place whilst enclosing the seam. 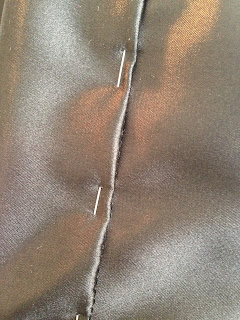 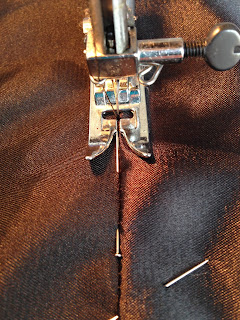 Stitching in the ditch


For finishing the front edge, the pattern recommends a rolled edge or a fold over and top stitched finish.  I decided to go for a bias binding edge, to enclose the seam but also to give a bit of weight to the edge.  I made my own binding Colette's fab tutorial.  However, sewing the satin onto satin was fiddly as, in the words of Vivienne in Pretty Woman, it was a "slippery little sucker" but I got there in the end.  A quick press and it was delivered.

It's a great little pattern.  My only criticism, as such, is that I would change the work order slightly: sew the shoulder seams, attach the sleeves then sew the side seams (particularly if you are going to french seam them!), but no real biggy.  Think I'm going to make one for me and my niece will probably get one as she has just said how much she loves it (unless she steals her grandma's one first lol). 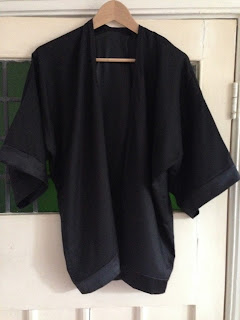 The Pretty Woman Kimono Jacket
Posted by Melissa at 09:39